Half year post. The power of mind, work in progress!

There was a hot race (Cabos) and there was a cold one (France). Both were grueling, but fun.
Yes. pain is fun.

Here is the long and super overdue Cabos report. 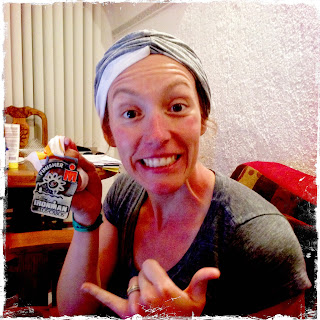 As most of you know, 2012 was a challenging year for me. Thankfully, we are well into 2013.  Last year, I learnt a lot. This year, I was finally ready to test the lessons learned over the last 18 months. Over the winter months, I trained for my first ever early season race. In short it meant 5-hour rides on the trainers.

I was fortunate to have Eric, the best husband and Sherpa, along for the ride.


We landed in San Jose del Cabo on March 8, 9 days before the race. I wanted to get used to the climate, test the course and get a baseline kind of tan before the race to avoid roasting-kind of hard with UV index of 11…


It was the first year the race was on so let sum it up: lots of expected surprises: last minute adjustments to the run course, beach start for the swim, body marking the day before-hence I body marked my bed on race night… and other kinks that should be work out for the years to come.

Let's move forward to race morning. I had slept pretty well-considering- and ate breakfast as usual. Eric and I hopped on the race shuttle and we were in transition at . I did my usual, fuel, tires, Garmin set-up stuff and then off to sit next to the change tent to wait for warm-up. 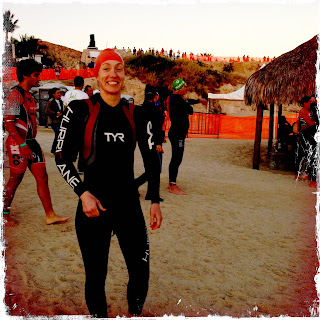 I was next to Matteo, an Italian friend we met during race week and we wished each other a good day-we would see each other at the finish line.


The “dos minutos” lasted forever until the horn went off and I sprinted to the water. My first beach start was a success as I missed the huge swell and was in THE pack, drafting. The pack was good, calm and there were two other girls in it. It was a little wavy but the water was warm, I’ll take that anytime.

Despite being on the harder end of the spectrum, T1 went smooth. The volunteers were awesome and really helpful. I was out of there quickly and left my T1 bag where my bike was parked, and ran to the mount line.


2 laps, windy, with 2 main out and backs: San Jose-Cabo San Luca and San Jose-Airport on the toll road 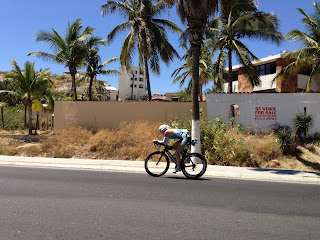 The bike starting with a 5-6% 1.5k climb out of T1 to reach the highway towards Cabo. There was a head wind heading out. Needless to say the headwind was stronger on the second lap. So was the tail wind though! I had ridden the San Jose-Cabo route a few times and I am glad I did. There were noticeable potholes as well as those little tennis ball halves scattered across the road to slow down traffic. When going over those, as they were not covered, you had to pick your line and hope for the best. Quite a few people flatted. I was feeling good on the bike. I was holding off for the first hour coach Björn has said to build into my pace. I was fuelling on schedule and taking salt pills every 30 minutos.

When I finally hit the climb onto the toll road, guess what: it was much tougher than it appeared. We had driven that part twice as it was prohibited to ride prior to race day. Mexican jail did not appeal to me-I did not sneak onto the road. Some did, good for them: no one has seen them since!


Back to the climb though, it was a UBC-hill style, but it never ended. Like Yellowlake, but even more deceiving. When you finally crested, you could finally fly a little downhill into the crosswinds (very manageable) and climb some more until the turn around. Coming back towards town was headwind. Ha. And my power meter decided to show I was pushing 17 to 60 watts. Right. I let it go for a while, resetted the thing and it started to work again when I hit the second lap towards Cabo.


Side bar: there was NO signage on the course. I knew where I was with mental calculation. A 60k was spray painted on the road, but nothing else. Having said that, every viaduct had a crowd nested under, cheering like mad, even in the middle of nowhere. That was awesome.

I flew by special needs as I was self sufficient and my bag was not waiting for me.

I started picking up guys on the second lap. Some let me pass, some did not. Some got red carded, I smiled.

I saw Eric in before heading towards the toll road for the last 30-ish-k. He was stoked-little did I know my chip was not working so he knew I was still in the race.

I hit the toll road climb again. The temperature was getting up there-making my eyes burn with sweat. Once at the turn around, the head wind/cross wind now, was even stronger. I focussed being as aero as possible and made it to T2.

I was stoked to get to the run. I was ready to nail it. Hope is always good.


In and out-once again, the volunteers rocked. 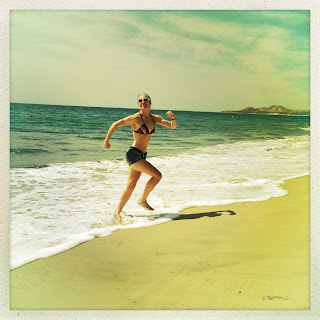 I hit the road and my legs felt like lead. No worries I thought, it will take 5k and it will be over. Yep, it was over after 5 k. I officially had no legs left. I was in agony. I started walking early on in the race as I hoped it would help me find my legs. Stomach was good, I gelled and took salt pills on schedule; however, I had nothing left in the tank. I must have drunk 100 baggies of water, splashed 100 more on my head and back, filled my top with ice, but I was moving forward, slowly.

How I actually felt... 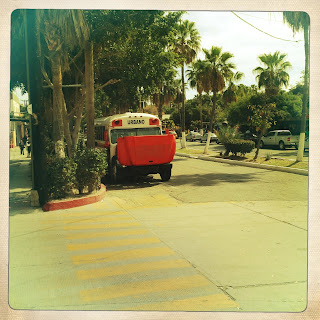 Side bar: the turn around for each lap was half way down the finishing shoot. Yep.

I felt slightly better on the second lap but girls were passing. I was trying to hang on until I passed 1 girl in my age group. It gave me hope. Everyone was suffering, some more than others, including myself. Until today, I still don’t know how my legs managed to complete the marathon. I was enjoying myself but man- I was suffering. On the last lap, I saw Eric and he screamed: “ Björn said to run the last 10k flat out”. I smiled. It was the plan, I would give the flat out of the day, which was slow, but faster than lap 2. With the multiple out and backs, you could see your competition-with 3k to go, I swore to myself, that’s it, NO MORE WALKING, which I managed. I was living the ironman shuffling experience . At the last corner before the finish, I saw Eric screaming “Lâche pas la patate!” When I could see the clock, I knew I was clocking my slowest race ever, but I did not care. I was thrilled to finish. I raised my arms in the air and smiled. Biggest victory of my life. I had just PBied in pain and mental toughness. I got my finisher medal and my finisher poncho: small is not small unless it’s female small.

Two volunteers caught me and as soon as they got me, my legs went. I was sent off for an hour massage (the best thing ever). I was in pain, but all I could think about was . I had finally found the joy of racing again.

Four months have passed and I am still on a high. My 3rd place earned me a spot to Kona 2013-and a big-a** Mdot trophy. My tan is fading but I can’t wait to race again.


Thank you to Eric the almost-ever right best hubby and friend.


Björn, the best coach who keeps supporting my roller-coaster rides


To my teammates and friends, who I wanted to make proud on race day


And to my family, who has been supporting me for 35 years.


Finally, thank you to the race director, his team and the volunteers. For a new event, it was quite a success.


If you think you can’t go on-stop thinking.
Posted by Geneviève Cauffopé at 10:06 AM 1 comments

Geneviève Cauffopé
Vancouver, BC, Canada
A new mom who took on running and who is now pedalling her way through Ironman distances and endurance events